Inspired by the good folk at www.returnofthecaferacers.com  I thought I'd have a crack at zero budget building.

Bought a little RS100 for one of my kids about three years ago, but its been sat at the back of the shed ever since. Had a rotten seat and a worn out kickstarter gear, and I managed to pick up a very cheap GS125 in the meantime for junior.
His younger brother won't be seen dead on something 30 years old, the ungrateful little goit.

So I've dragged it out, slapped a pair of ace bars I had in the shed on it, used the pillion pad off a Jap sports bike I found in the road a while back as a seat, next step is to fabricate a seat hump from a three quid bit of alloy sheet I bought at a classic bike show. I'm thinking maybe a little mesh fly screen and a chequered flag type graphic.

Total cost so far, including buying the bike, 70 quid...

5,000 hits? good lord. Who ARE you people?
OK, so I can understand the Ducatisti being interested in the Italia Auto day, or the general interest in the 59 club pics.

But who are the Dutch and the Portuguese who keep visiting the picture of my GS550 chop?
Or the Colorado, USA posse who are riveted by my picture of a Honda Express moped...

Feel free to introduce yourselves. Should be all done by July.
There's another decade or so to go and if I don't post quite so regularly, I do apologise, but the sun is out and there's riding to be done and festivals to attend. 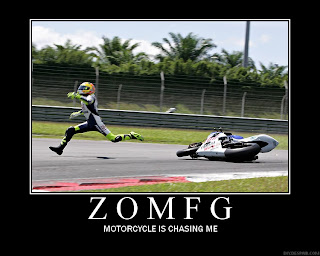 Posted by Ixion's Disciple at 20:36 No comments:

In 1997 I decided to make brief second foray into the second hand motorcycle business.

I'd just signed on for a three year humanities degree at the dear old alma mater, The University of Glamorgan, or as it was known in those days "degrees 'r' us".
These days I believe it to be quite a good university. Back then it was full of overly muscled sports sciences students, stoners studying environmentalism and a fair proportion of people who either couldn't get in anywhere else, or were attracted by the honest Welshness (and cheapness) of the place.
And for what I went to study, which was writing and drama, it was staffed by some remarkable talents.
With no qualifications other than four dodgy GCE's and an Grade E in A-Level technical drawing, oh, and an RTITB diploma as a semi-skilled motor mechanic, I went in as a mature student, got a full grant, and a full student loan. But it wasn't going to be easy - as a postie I'd been making well over a thousand a month, and I was going part-time, so that was going to be halved and I still had a family to support.
So I used my student loan to start a short lived second-hand motorcycle business, working on the principle that even if I only made a tiny profit, the money would last longer if tied up in aluminium and steel.
So I took out a small ad, saying I wanted to buy a motorcycle. Any motorcycle.
By the end of the week I had spent £1,000 and had amassed a Honda CB500-4 chopper from a kid in Builth Wells, A Suzuki GS400, Three quarters of a CB550, A Kawasaki KE100 trail bike from a bloke in Newport and a Benelli 250-2C.
The GS was sold in days, but the rest didn't go quite so smoothly.
The CB500 was kind of funky, and I liked it a lot, so didn't mind hanging on to it for a bit.


I broke the CB550-4, selling enough parts to make my money back, and still having the frame and forks to off-load. I never did sell those bits though, and they went into the crusher with the Peugeot when the council cleared my lock-up.

The KE100 was a lovely little bike, and far too attractive to leave on the street. The teenagers round my way would have had it away in a trice.

So I stuck it in the basement, where mice chewed a hole in the two-stroke oil tank. I fixed it with a hot knife and some gaffa, sold it for a tidy profit to a kid three streets down, and as I expected he only had it for a fortnight before it got stolen.

The Benelli was a mystery. The bike was pretty much immaculate, and the bloke who sold it to me started it up, and it ran fine, so I gave him £200 for it.


But I could never get it to run for more than a  mile before it would cough to a halt and refuse to go again. But if you left it for a few hours, it would start up again for a mile and die again. I never got to grips with it, but still managed to sell it for £350, despite warning the buyer about this baffling fault. As far as I know he never worked out what was wrong with it, and in the end it got chucked in a skip...

And while all this was going on my whole world was turned upside down, the response to the demand: "It's him or me." turned out to be "him", and I went from my family home to a single bedroom in student digs.

I flogged the chopper for a healthy profit and good old Cassius the XS650 took me to and from work, and back "home" at weekends to see the kids.

And for a few years automotive nonsense took a back seat while my time was taken up with studying, writing, working, looking after the sprogs at weekends, acting,  falling in love and generally arsing about with drama students and musicians. Despite everything else, I had a ball...

Some pictures from Italia Moto 2011, Bristol, where we were all deafened by the clatter of exposed clutches. I thought something had fallen off mine, to be honest.

Posted by Ixion's Disciple at 17:53 No comments:

I can only plead blind stupidity when it came to the purchase of a Polish-built Fiat 126.

The building of trikes was becoming increasingly popular at the time and many of them were built by cutting a VW Beetle in half and welding the front of a motorbike onto its back end.

I happened to have the frame and front end off a Honda CB550 knocking about and was contemplating doing the same thing.

But I was going to be different –  I thought that if I got a rear-engined Fiat 126 and attacked it with an angle grinder I could do the same, and build a small, cheap, lightweight trike.

As these things happen, a couple down the road had a 126 for sale for £250 with 12 months tax and test, and with my Peugeot misbehaving I bought the Fiat and decided to use it as it was for a bit.

Now Fiat 126's, in case you didn't know are tiny little things with air-cooled twin cylinder engines. Like VWs they have a fan.


It came home on the back of a recovery truck and I bought another alternator and fan assembly from a breakers yard.

Fitting it was a pain, and in the process I found that the vibrations from the engine had loosened the cylinder head nuts – something that I would have thought was impossible.

I clearly hadn’t done a very good job of fitting the new fan, because ten miles down the road the new assembly fell apart as well.

Another fan was fitted and then the cable operated window winders snapped too.

Then a tyre exploded. I'd had the bloody thing for three months and had barely covered 100 miles in it. In fact, it had travelled further on breakdown trucks that I'd actually driven it. It never completed a journey of more than 5 miles without breaking something or other.

After a while I gave up – all ideas of turning the thing into a trike were abandoned as it clearly was hellishly unreliable. It sat outside my house for a few months, moss growing on the window frames and the interior going mouldy cos I had the driver's window inexpertly wedged shut with a clothes peg. I left the thing unlocked but not even Pontypridd's most desperate car thieves wanted it.
Eventually I sold it for £25 and said good riddance to bad rubbish.

What a nasty little pile of Wombats' do's

* Completely terrible
Posted by Ixion's Disciple at 23:08 No comments:

The entente cordiale gets a little diluted


With the Citroen BX on the way to the scrapyard a replacement was needed.
The chosen vehicle, also French, was less of a gem however. I wanted an estate, and I wanted a diesel, for reasons of economy.
I found, on Cardiff’s Broadway which was then the site of a dozen dodgy back street car dealers, a Peugeot 305 diesel estate.

It looked sound and ran well, if a bit noisily. I paid £1,000 for it, and on investigating the MoT certificate I discovered that the Peugeot had miraculously done almost 50,000 miles backwards since it was issued. The mileometer said it had done 107,000. The MoT said 153,000.

I did consider taking it up with the dealership, but I figured that if you buy a car for £1,000 from a back street dealer, you deserve all you get.

It went well enough, but had a number of niggling little faults.
None of the trim fitted properly. The plastic was nasty and brittle. The heater burst on holiday, and I bypassed it by fitting a length of hose between the two intakes, but after that it ran very hot indeed. And it was icy cold in the winter.

Eventually the head gasket between the two centre cylinders blew and although no water got past the break I found that in order to start it, it took a good five minutes, or so it seemed, of winding the starter before the thing would burst into smoky life.

Less than a year after buying it I got fed up with it, parked it in a lock up garage and left it there to fester. Eventually, while legging it from a busted relationship and a valley that had lost all of its once Brigadoon -like charm I handed the keys to the garage back to the council and left them to deal with it.

By the way I did buy a towbar for the Peugeot but the car broke before I got the chance to fit it. So if anyone needs a tow bar for a Peugeot 305….

no, you get to be the worlds second oldest car manfacturer thanks to mahoosive French government susidies...
Posted by Ixion's Disciple at 18:22 3 comments: