In the footsteps of Hannibal

If you were going to do a grand tour of Europe with a family of four what vehicle would you choose? An Aston Martin? A Mercedes or Volvo estate? A big 4x4?

I'd been without a vehicle beyond dear old Cassius the XS650 for a bit,  and had been using the new bird's Ford Fiesta Popular - 900cc's of raw Dagenham Power.

The Fiesta was a handy little thing, but she was offered The Escort cheaply – £400 from a relative – so she flogged the Fiesta for £25, whence it became a festival run-around, was the abode of a young homeless couple on a patch of waste ground, and ended its days dramatically being used in a ram-raid,which was a suitable end for a vehicle of such impeccable Norf Laaadon origins.

The Escort was a beltingly good little car and provided had provided sterling service for three years, pottering back and forth to work with little maintenance.

When I was offered the chance to try out a Eurocamps holiday free of charge a grand tour was planned – England to Italy and back, and after a few fruitless attempts to borrow a bigger car the Escort was pressed into service. 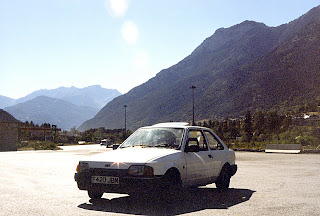 The first stop was to be Luxembourg. Being a cheapskate, I wasn’t going to use the French toll roads, so we chugged though Northern France, across the First World War battlefields through Amiens, across the Somme, and down to Sedan, all of which the little Escort took in its stride – which is more than I can say for the cramped occupants.

We discovered that the French were not too keen on letting us find Belgium, because all the road signs only pointed to French towns, not Belgian ones, and the French roads were appalling.

Over the border into Belgium and through the Ardennes forest, the long sweeping roads through the forests were a godsend after the stop-start of the French villages, we were through Belgium and into Luxembourg in a few hours, where the roads were even better, and the welcome fulsome – and they had the cheapest petrol in Europe.

An early start saw us heading for Germany and across the border at  Trier, stopping at a German site near Stutgart with a high speed rail line down one side.
We made the astonishing discovery that Germany closes on Saturday lunchtimes for the weekend, which rather curtailed our food intake, though not the beer intake as the campsite staff had kindly stocked the fridge so it was beer, ham, bread rolls and cheese for tea.

So far the Escort’s performance was faultless. On the following day we had to make it to Italy, on the same day as England were playing Germany in Munich at football, which resulted in some fairly good-natured barracking from minibuses full of German football fans. And my word, the Germans drive fast – why on earth they don’t have more accidents defeats me.

We headed for Austria, and the sight of the Alps approaching 70 miles away was both exhilarating and scary – would the car make it?

We had to buy an Austrian toll road pass to use their motorways and in those pre-Euro days, I didn’t want to buy any Schillings, so we got one in Germany and headed over the Alps, very slowly, following a procession of tractors.It has subsequently struck me as odd that the main road from Innsbruck to Munich is little more than a British b-road, and that farmers are the same the world over - Its going to take more than a horde of tourists to keep them from taking a trip to the bier-keller in a Massey Fergüsön

I didn’t like Austria – there was something about the place I couldn’t put my finger on – it was just too clean.
We stopped briefly at a spotless motorway services if only to get the full value from out toll pass by having a slash, and then headed over the Brenner Pass which is a quite incredible drive and one I wouldn’t have missed for the world.

Then three days after leaving England, we were in Italy – and I loved it from the moment I arrived.

It was endearingly tatty and you can forget everything you have heard about Italian drivers – they were excellent – they kept their distance, and while everyone drove like Senna, they all seemed to know what they were doing. And you can buy fresh bread, gorgonzola, parmesan, olive oil and red wine in the motorway services.

After all that driving, when we got to Lake Garda, where the German visitors were in a very reserved mood, but the English tour guides ecstatic – England had beaten Germany 5-1.

I figured we all needed a bit of a rest – the Escort most of all, so we sat around for two days before venturing out. The Carabinieri traffic police were a bit disturbing – I do think that a submachine gun over the shoulder is far more likely to make me behave than a speed camera – and the presence of scantily-clad ladies touting for business in laybys was most entertaining.

It when we went to fill up with fuel that what could have been a disastrous event occurred.

The ancient Italian who ran the filling station stuck the nozzle in while I visited the loo and when I came out I found the tank had been filled.

Next week: the voyage home.
Posted by Ixion's Disciple at 17:15