So having ditched the massive contract of zero profit I had to get another vehicle to cover my two distribution areas.
I wanted a panel van, cos they're easier to drive and I needed a big one to trunk parcels from Birmingham.
I had a shortish wheelbase Iveco 35-10 on hire, and made the fateful decision to buy its bigger brother, the 45-10 Turbo Daily.
It was a decision my fledgling business would never recover from.
I bought it from a big Ford dealers. It cost £15,000, £5,000 off the new price, and  the payments were £400 a month - £300 less than it cost me rent one.
It was a one-year old ex-demonstrator with 25,000 miles on the clock. I knew these vans. They weren't Mercs, but they were pretty good.
And I'd had it three weeks when one of the injectors fractured and spat the end into the engine, destroying it completely.
No problem, you might think. I've had it three weeks. Surely the sale of goods act protected me? 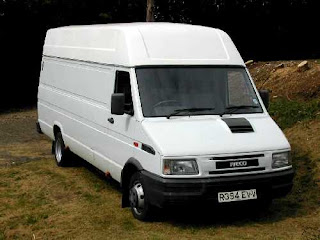 Not according to the salesman. They said I'd mistreated it, and refused to pay for a repair. I had it towed to my nearest ford dealership. And there it sat, for the next six months. I argued with the dealer. I argued with Iveco Ford Trucks. And all the while I was paying for a truck I couldn't use, and paying £700 a months to rent the replacement. I wanted the dealer to pay for the rental, and repair the truck. They refused. Ford agreed with me, after pressure from my local dealer. But the sellers were having none of it. Eventually, after six months, the dealer agreed to pay £2,000 for a replacement engine. But I'd have to pay the truck rental. Ford agreed with them. By now the impact of a £8,000 in extra charges had all but crippled the business.
I caved in.

In the meantime, I'd picked up a bunch of small but profitable contracts I was servicing with my cheap as chips Freight Rover.
But its advancing years were starting to show and its age didn't quite fit the image the network was trying to portray.
So I flogged it. For twice what I'd paid for it. More than once it crossed my mind that I should have gone into the second hand truck business.

Using the cash as a deposit I bought a newish Citroen C25 van. The comparison between the Iveco and the Citroen could not have been more marked. It was an incredible vehicle, which was driven well and truly into the ground over the next two years. It was small outside and huge inside, 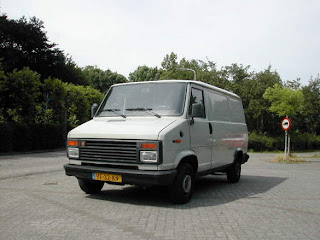 I and my team of fairly useless drivers put 170,000 miles on it round Cardiff, Swansea and later West Wales, it never broke down, and by the time I'd finished with it in 1992 there wasn’t a panel on the van that hadn’t been damaged. I was driven over into and through things. It had been rolled twice, at speed, but it still ran, despite enduring 40,000 mile servicing intervals (though it was driven so hard we got through brake pads every 8,000 miles) and did 50mpg. Never missed a beat.
I ran the company from the cab of that little Citroen, with a mobile phone the size of a cornflake packet that I had to drive to the tops of hills to use.

(Part two in a short while. It's a lengthy tale)
Posted by Ixion's Disciple at 23:53