In 1965, Honda introduced to the world a groundbreaking motorcycle. Their biggest machine to date, it was a world away from anything the then dominant British motorcycle industry had on offer.
The CB450 was a twin, like its rivals. But that was as close as the similarities went.
It had two overhead camshafts, rather than none in the case of BSA, Triumph et al. It had an electric starter. It didn't vibrate your fillings out. It was fast. It didn't leak oil in vast quantities.
The Brits were using designs that dated back to the Second World War.
Honda were looking forward, with an engine featuring about six yards of cam chain, a wet sump, horizontally split crankcase and something exotic called "torsion bar" valve operation.
It was the CB450T, with its high spec switches, deep chrome and reliability that started the killing off of an industry that had once bestraddled the world.
The fact that it didn't handle worth a damn meant nothing to the open minded.

The CB450 went through various guises until Honda finally killed it off in 1978 in favour of the equally ground breaking CX500. 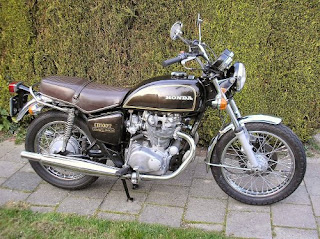 Unfortunately for me, I bought a 1975 model in 1981. And by then the CB500t (as it had become)  was pretty much dead meat.
I liked the slabby, chunky look of the thing, bedecked as it was in chocolate brown paint and a top-box the size of a starter home. But I soon found it handled like a greased pig and was impossibly gutless compared to chums GS550s and XS500s.
I‘d had the 500T three weeks when disaster struck.
The starter motor clutch, essentially three metal slugs in a metal ring which were held in with biro springs, fell apart under all the vibration and the various bits whirled around inside the generator housing, destroying the whole thing.
I took it back to Hutchings, who looked at me blankly when I said that I'd paid £700 for it three weeks ago and I really felt they had some responsibility to fix it.
They suggested it had been ridden hard. I pointed out I had started it 40 times since I'd bought it and felt starter motor clutches should last a bit longer than that.
They said things about how expensive Honda parts were and how hard they were to get.
I said things about trading standards and the Sale of Goods Act and goods of merchantable quality.
They reluctantly gave me a Honda trail bike of dubious legality with next to no no teeth on the back sprocket to use while they tried to source the parts.

After a fortnight the trail bike was unrideable, and they gave me a Garelli moped instead as it was "the only thing we've got to spare" for my 30 mile a day round trip to work.
It blew up in four weeks.
Hutchings said they had still not been able to get a new generator from Japan and they had run out of bikes for me to destroy.
The mechanic at Hutchings managed to mend the old generator so worked a little bit - just enough to keep the ignition circuit running, but not enough to charge the battery
They gave me a spare battery and a charger told me to run it as a total loss system

One autumn evening I had been out for a ride on the Honda, when I was pulled by a motorcycle policeman on a Norton Commando, as I'd been doing 65 mph in a 30mph zone.

The conversation with the copper went as follows:
Officer: “Do you know how fast you were going, sonny?”
Me: “Yes, about 60.”
Officer: “Well, why were you going so fast? In a hurry to get somewhere were we?”
Me: “Well, the thing is, my lights don’t work properly, so I was trying to get home before it got dark.”

There was a pause. The copper looked as his notebook and I could see him weighing up the paperwork that was approaching.

Try doing that with a speed camera.

It took Hutchings four months to get a new generator. A starter clutch was apparently unobtainable.
I told them to fit the generator and I'd wait for one to be hand carved in Hammamasutu. As I picked up the bike the old school mechanic, who was fed up with his boss lying admitted that the genny was a second hand one, and there was no point in waiting for a starter clutch because the crank had been so damaged a new one couldn't be made to fit.
It was an inauspicious start to two years of ownership. I lived with a kickstarter and hauled the ill-handling pig around for a while - I fitted a screen, got stuck in blizzards on Dartmoor, patched the holes in the silencers with gun-gum, went on weekend rallies, learned to look after it so I was merely inept rather than cack-handed, commuted on it every day in all weathers, met gurls, and all that stuff.
Moved in with a girl, split up, moved out, came to be a victim of unemployment in Thatchers Britain (though to be fair it was because I was rubbish at my job, which was not Thatchers fault), and went back to mum and dad, a bit sheepishly.
It was parked up next to the shed, where it stayed for six months, rusting quietly.