After five months on the dole, and an abortive attempt to train as a fighter controller for the RAF I got a job pumping gas at a local filling station. 60 hours a week, covered in diesel and smelling of petrol, in all weathers on a forecourt that was open to the elements and hand cranking the old diesel pump when the power went off in winter - we had the contract for the council as we were the only filling station with a pump that could be hand cranked to fill the snow ploughs. I loved it. It paid twice what i'd earned in insurance, and I could wear jeans and didn't have to wear a tie.
I cycled the five miles into work most days through glorious Devon countryside, until I'd scraped a few quid together and it was time for another vehicle. The barely-used CB500T was gathering dust.


All the advice I had been given by some older bikers was that there were two good dealers in Exeter – they had started trading back in the 1920s and were run by horny-handed, oil-spattered, sons of toil.

There was also one brash newcomer which had carpets on the floor, computers instead of parts books and salesmen who wore suits. The general opinion was that this garage was to be avoided.

I looked at their stock which mostly contained a collection of three- and four-year-old 550cc fours and 1,000cc behemoths, and there, lurking unnoticed in the corner was a Honda CB250RS. 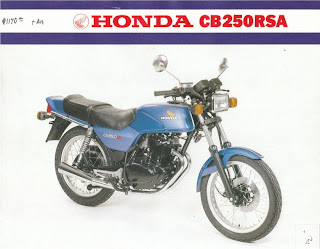 This was unlike any of Honda’s usual offerings, and was a lightweight 250cc single cylinder machine with the engine from the XL250 trail bike, fitted with balance shafts to smooth the vibes, spoked wheels, lovely little shorty megaphones and nothing unnecessary  that might make it heavier, like starter motors.

I sat on it and it just seemed right. It fitted me perfectly. There was brief haggle, they gave me twice what I had expected for the 500, sorted out the finance, and bunged me a free crash helmet into the bargain.

Riding the little Honda back home I loved it instantly. The little beast flew along – 92 mph top speed, the slickest gearchange I had ever come across, handled like it ran on rails and did about 75mpg.

It was comfortable and felt beautifully put together and was more than capable of keeping up with bikes twice its size.

I had moved from the countryside to the fleshpots of Exeter, and found I could cover the 13-mile journey to work in 11 minutes.

I had plenty of time to spare at the garage, an inexhaustible supply of paraffin to keep her squeaky clean and free Duckhams hypergrade  from the garage tanks meant she had oil changes every 1,000 miles so she stayed in mint condition.

God, I loved that little flyer and went everywhere on her,, chased girls, hurtled through the night on gallant missions and insane adventures, found the great biking roads that were the Sidmouth Loop and the A39 Coast Road. One of which has been ruined by speed cameras and the other by a dual carriageway.


After a year-and-a-half of ownership I was on a trip to London when, outside the UK headquarters of Honda in Chiswick, there was a loud spang.

The gearbox had fallen apart. This was a disaster – second-hand engines were pretty thin on the ground, but  I found a scrap engine with a good gearbox in Sarf Lunnon and made an awful attempt to repair it using a socket set from Argos in a my mothers garden shed in Twickenham.

I didn't set the balance shafts properly and it vibrated like a jack hammer - so I rode to Woking and stuck it on the train.

I managed to fix her properly back at the filling station, but she was, sadly, never really the same again, which was down to my cack-handedness.
So one Saturday I reluctantly decided to replace her, with something a bit larger and went down to another dealer where I put a deposit down on a Kawasaki GPz550 which I intended to pick up the following weekend.

But as ever things didn’t quite turn out according to plan.
Four days to the weekend, when I was due to go and pick up my new GPz550 I was making my way out of Exeter to work on a wet Tuesday morning when I saw a large grey Mercedes leaving the car park of the main police station. He saw me, stopped at the entrance with his bonnet sticking out into the road, I pulled out towards the middle of the road to avoid the Merc.

Then, with just 10 yards to go, the driver decided that he could clear the car park before I reached him. He was wrong. I hit the Merc fair and square a foot behind the front wheel, flew over the handlebars, bounced off his bonnet and slid 50 feet on my back across the main road, coming to a rest with a bump against the kerb.

I lay there for a minute – but didn’t seem to be in any pain. That meant either I was the luckiest man in the world or I was dead. Eventually the traffic stopped and I got up. Entirely unscathed, I walked shakily back across the road where my bike was embedded firmly in the side of the Merc. The driver of the Merc got out and looked at me. I looked at him. He looked sheepish. “Sorry, Ollie mate,” he said – we drank in the same pub.

She was no more – and so, sadly was my deal for the GPz550 – I had nothing to part exchange and there was a long wait in the pipeline before the insurance company paid out.
Posted by Ixion's Disciple at 20:29