Father Bill Shergold and The 59 Club

Today is the 52nd birthday of the 59 club


A couple of years ago I was sitting in the office when the phone rang. This is, it has to be said, a pretty common occurence in a newspaper office. It could be anything, from a dull conversation with a politico to a tin-foil hatter giving it loads about the trained monkeys that come to his house and steal his shoes for the Government.

On this occasion it was a softly spoken elderly gentleman.
He said his name was Father William Shergold, who wanted to know if we would to put something in the paper about a TV series he'd just done a piece for. Pretty standard local paper fare, to be honest.
"The programme is about my involvement with a youth club back in the 1960s. I was a bit of a celebrity back then I suppose," he said, and laughed, softly.
As a commited devourer of everything motorcycling related I said: "Not Bill Shergold? of the 59 club?"
"You have heard of it? Oh, how splendid."

Later that day I went to meet Father Bill, and got a look at his mountain of  papers, photos and newspaper clippings. We chatted a lot, and "Farv" let me take away a few items for scanning, and we did a big spread on Father Bill and the 59 club.
He gave me a copy of the TV programme and I bunged it on Youtube.

I popped round and saw him a few times after that but a few months later I got an email from the a club member who had kept in contact, who told me that Farv wasn't very well at all.
I visited him in hospital and the old boy was pretty much done in. He died in hospital in May 2009 and was given a good send off by the 59 and 69 clubs at his funeral.

What happened to his Archive, I have no idea. His sister took it over, and his house was renovated. I hope the papers are out there somewhere.


Here are some of the pictures I scanned from Father Bill's collection. 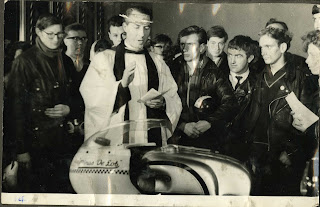 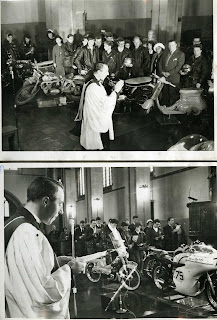 Hello, my name is James Roland and I am researching a biography on Fr Bill Shergold. Your article is very helpful. I've got a few questions for you. Please contact me at pastor.james.roland@gmail.com.
THanks!