The Eagle has landed. Upside down in a bush.

In April 1979 I took my by now battered and worn out Batavus HS50 to Corby in Northamptonshire and part- exchanged it for the only new motor vehicle I have owned.
I wanted something a chunky and a four stroke - a Honda CJ250T or Dream was top of the list.
For an18 year old hoodlum in 1979 there were essentially four camps. You bought a Honda 250, where you kitted yourself out in Belstaffs and drank real ale and didn't get girls, a Yamaha RD250 - Bomber jacket and football scarf and keg bitter and might pull a farmers daughter,  a Suzuki GT250 - lancer jacket and silk scarf and lager and blond girl who chewed gum and picked her nose with painted nails,  or a Kawasaki KH250 - green Kawasaki jacket, snakebite and whatever you could score - these guys were the ones with the skinny feral girlfriends who would do anything for a bottle of Cinzano, three dexedrine or ten No 6.
Poor people got MZs and CZs, the eccentric bought old BSA C15s or Triumph T25s and the stylish got weird Italian stuff like Benellis. But it had to be a 250. Anything less was just for the wage slave and the poor.
But once again – although I was going to be making the payments – it was my dad who was down as guarantor, and what he said went.
And what went was something ever so sensible - an MZ TS150 Eagle.
At the end of the Second World War Britain was offered two options from what was left of German industry as war reparations.
We could have the design of the Volkswagen Beetle, or the blueprints of a 125cc two stroke motorcycle, manufactured by the firm DKW.
Being the brilliant business brains that we are, we took the motorcycle and handed the plans over to BSA who turned it into the Bantam. These were seen on Britain’s roads throughout the 50s, 60s and 70s, often painted bright red and wobbling along with a junior postman on its saddle.
Of course when the Germans handed over the plans it didn't mean that they forgot how to make motorcycles and many former designers ended up in East Germany, where they set up a factory at Zschopau which became known as Motoradd Zschopau, or MZ. Oh yeah and the Russians nicked the plans too and built a factory at Minsk, where they still make them. 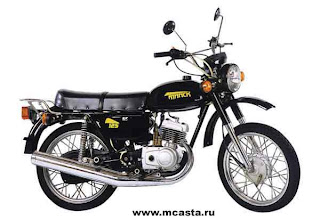 http://www.belarusguide.com/industry1/Minsk_motor.htm
Now I know that Ladas and Wartburgs didn’t have much of a reputation for reliability, but the MZ was  a good machine to cut your teeth on and could be purchased for £350, brand new. It had a whole six months (or 3,000 miles) warranty.
My training to ride this machine involved it being pushed out of the back door of a dealers in Corby, being given the plastic switch that passed for an ignition key, and being told first was down and the other four were up, and to slip the clutch a bit till I got used to it. Thank goodness it didn't stall on the way home or I would never have been able to start it again.

It was pretty reliable, provided I didn't try to practice my cack-handed mechanical skills on it too often and changed the plug regularly - and fortunately it was built out of much better metal thean your average jap which meant fewer stripped threads and chewed up screw heads - and it had a quirky style all of its own. It was covered in acres of inch thick chromium plate, and apparently was carved from a single lump of alloy by the Germans.
The most prominent feature of the MZ was the petrol tank, which rose vertically for about six inches in front of the riders crotch, discouraging panic braking. It also had tyres made out of leather, with the tread glued on, and a tool kit that could have been used to dismantle a Mig fighter.
I learned how to maintain it, after a fashion, changed the tyres for Contis, and daringly turned the handlebars down a bit. I rode the MZ all over the shop – including  on an epic four corners trip taking in Lands End, John o’ Groats, and the Lizard  in ten days. - on this trip i nearly ruined my chance of progeny by riding into the back of my mate Cris's CD175 while fooling about on Porlock Hill.
I won the long distance award at the Peak Rally for riding it from Exeter to Buxton in February, in light sleet.
And all on L-plates
I never felt it was stylish enough for me to dare buying a leather jacket to wear on it, and my Nolan Guardsman open face was all that was required - Full face helmets were for real bikers, not the riders of ring-a-ding commie two strokes.
Unfortunately the MZ came to a sad end. Full of foolish youthful devil-may-care one night, and under the influence of three pints of bitter and a hay fever tablet, I ran into a grass verge while negotiating a bend. The MZ somersaulted over my head and landed, terminally, in a heap. I got up barely bruised but the MZ was toast. It was a good few years before I next came to realise that booze and motorcycles don’t mix. 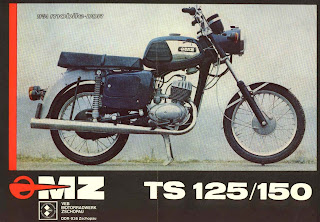